A new player on the social networking scene that is getting attention is virtual online pinboard Pinterest.com.

The site, which first came onto the comScore radar in May 2011 with 418,000 unique visitors, has surged over the past six months to nearly 4.9 million visitors. In November, the average visitor spent nearly an hour and a half on the site over the course of the month and more than 15 minutes per visit.

A lot of you may still be wondering, “What is Pinterest? That definition is changing, but the short simple answer is that it’s a social network where you can pin things of interest to you on pinboards. Followers can view your pinboards and pinned content, repinning if they like anything they see. However, a better definition for Pinterest could be made—a one word definition—”addiction.” Users of this site are losing hours at a time scouring over content in an all-out ADHD-storm. People are stuck on pinning; pinned to their seats, if you will. And by people, we mostly mean women.

At the time of this article, I’m following 126 of my friends that trekked over from Facebook, and only 6 of them are male. They have combined together about 100 pins. One female user has well over 600 by herself. The themes of pinned content range from DIY crafts, dream homes and wedding, fashion and more. These topics may shed a clue as to why Pinterest is so appealing to females, but perhaps there is more to this demographic makeup than topic orientation. Psychology could play a huge factor into why women are the early adopters of this new social networking site. I’ve heard everything from the brain’s reward system being triggered by discovering new things, to Abraham Maslow’s hierarchy of needs (not that I believe the latter holds a true connection).

Whatever the connection may be, the outcome is apparent. Women between the ages of 25 and 44 make up 59% of Pinterest’s readership. Over the holidays, at family functions, I found out that almost every woman in my family had a Pinterest account. Some were accessing it via their iPhones or iPad. It was slung haphazardly into the conversation here and there, “I found some new shoes I have to get. They’re on my Pinterest. Look at this pillow I found on Pinterest.” Holidays and life events seem to amplify the need for Pinterest too. I’m sure at the end of 2012, our family Christmas will be a Pinterest Christmas, filled with recipes and decor inspired by content found on popular pinboards.

For all the potential Pinterest has, it will need to course correct a few times to remain relevant as it develops. The main obstacle I see is reducing the barrier to entrance for men. Whatever is keeping men lagging behind, could hurt the future of the site. I have no doubt Pinterest wants to avoid becoming “that thing I lose my wife/girlfriend to for hours on end.” It’s hot-pink buttons and logo could be one factor subliminally telling guys, “this thing is for girls.”

The site will also need to become more stable. A new site can experience downtime and other errors, but with gained popularity and respect, these problems become more egregious. I have found many instances where the images pinned don’t display, as well as other bugs on Pinterest. They’re overlook-able for now…

While Pinterst may not have the unique visitor depth of some of its social networking rivals, it does have intense engagement figures: 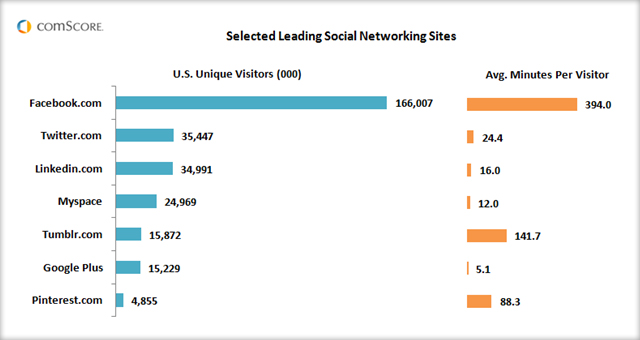 Pinterest is now in the top-ten social networks in the U.S., and number three in average minutes per visitor. All this face-time with people looking to find something new, creates a great scene for unveiling new products and services. Pinterest, like most other major social networks, has “Follow” buttons and a “Pin it” button for websites. Ease-of-sharing will undoubtedly lead to many blogs putting these little counters alongside their articles. We’re thinking about adding one to the Huebris Blog here, but before we do, let’s test the waters and see how many people Pin this article:

We’ve attempted to define Pinterest for you. Whether it turns out to be a social networking pinboard site, or an addictive outlet for women is as of yet, to be determined. But it is growing, and can be great for business. Oh and if you want to make your own share buttons for your website or blog, here’s the Pinterest Goodies page that shows you how. If you have any other questions, contact us today.